Right now, there are two pretty cool online Macro coaches that I've used. The first one is Avatar Nutrition. They are currently ramping up their version 2.0 (sign up to be an insider here and get two free weeks when it launches). I've been using Avatar since about March and have had some great success on it. The good about Avatar - an amazing support staff, it's relatively inexpensive ($10/month), you get weekly adjustments, high/low days, it has a reverse diet function, and more. They don't have an app yet, but should in about three weeks, as far as I know. I believe it will be both for the iPhone and Androids, which is welcome news.

The macro calculator for Avatar uses lean body mass for its protein calculation. It has a slider for carbs and fats so you can easily trade between the two. Right now, there is integration with My Macros Plus that allows you to easily see your daily macros in an app, but I'm hoping the new app directly from Avatar will be better. There are weekly weigh-ins with a multitude of goals.

The only bad things about Avatar are things that appear to be getting fixed soon. The website itself is very old. The articles are all pretty old and nothing's been updated for a long time. Again, this is all going to change on January 7th.

I've been trying FitGenie for a couple of weeks as well, just to see if I liked it any better. I do like it, but I'm going to stick with Avatar. FitGenie has a Premium Subscription option, but the base is free. It adjusts your macros weekly as well. It gave me more protein than Avatar recommended and appeared to base it on 1 gram per pound of bodyweight. You can also plug in your macros manually. The app itself is very nice, and they have a really cool meal planning option with the Premium service. One thing I haven't discovered yet is an easy way to pick high and low days like you can in Avatar. That's something I really like - I often know I'll be eating out, having a big workout day, etc., and it's easier for me to keep on my weekly macros by having a high day and a couple of low days.

I don't think you can go wrong with either Avatar Nutrition or FitGenie. If you don't want to pay anything, FitGenie is obviously the way to go. I like Avatar's customization a little better, and at $10/month, I think it's worth it.
Posted by Ben at 12:40 PM No comments: 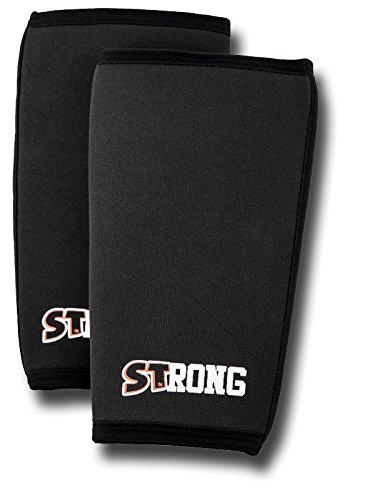 I am a participant in the Amazon Services LLC Associates Program, an affiliate advertising program designed to provide a means for me to earn fees by linking to Amazon.com and affiliated sites


These Slingshot Knee Sleeves are another one of my favorite items. I've been using these about a week. I measured my knees at about 16.5", which put me in the Xl range. These are really tight and really feel good while doing squats.

I've been using these Versa Gripps since I tweaked my forearm a couple of weeks ago while golfing, of all things. I've been able to keep deadlifting while using these to protect my forearm. I always use the double overhand grip (I've even recently learned to hook grip) to protect my biceps during a deadlift. These have been invaluable the last couple of weeks, though. These have enabled me to hit all my usual back exercises as well. Definitely check out their sizing chart if you want these - they need to be on tight to work. They are really comfortable and haven't felt like they're going to rip my forearms off. The one thing I do need to figure out is how to clean them. I don't like the traditional straps nearly as much as these, and they appear to be very rugged and will hold up forever. Now that I'm all healed up, I'm going to continue to use these and my higher rep sets for deadlift and use the hook grip for my maxes. Big fan of these.

Alright, first blog attempt. I'm working my way through PH3 right now, trying to build up some strength. Week 1 is in the books but I didn't quite get it done on schedule, so I'm about two days behind. Squat, Bench, and Deadlift today. My favorite day. That's all for now. Just want to see how this blog works.
Posted by Ben at 12:15 PM 1 comment: